I had the opportunity to meet Ralph Fletcher back in April at the Massachusetts Reading Association conference, where he was speaking as the closing keynote speaker.  As a literacy "nerd" and a long-time fan of Ralph's work, a colleague of mine and I sat at the front table hoping to catch a closer glimpse at the writing master.  Wonderfully, I got the chance to strike up a conversation with him about the future of writing workshop and the Common Core State Standards before he began.  My colleague snapped a shot of us (the excitement in taking this photo was similar to what I imagine I would feel if given the chance to take a photo with any of the New Kids on the Block during the late 80s) and I listened to Ralph talk about "boy writers" for 60 minutes.  I soaked up each and every word and proceeded to buy his book of the same name; Boy Writers. 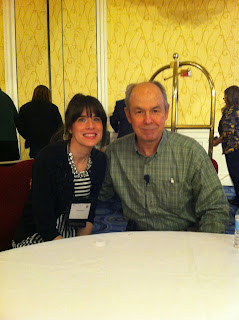 I am a HUGE fan of Ralph Fletcher and agree with him and what he writes constantly.  I profess his wisdom to colleagues, students, and  parents constantly.   I have heard that Ralph believes that revision is the most important stage of the writing process. And as painful as it is, and as conflicted as I feel in doing this, I must disagree with Ralph (I can't believe I just wrote those words!).

I believe that selecting is the most important stage of the writing process.  Selection is where students choose an incredibly powerful and meaningful memory and create a thoughtful and honest memoir.  It's where students select the naked mole rat to develop a feature article that teaches readers all about this disgusting-looking yet fascinating, little rodent.  It's the time when students pick to argue the case for or against longer school days in a persuasive letter to the board of education.  Selection is where an idea is chosen carefully and thoughtfully that will take flight and evolve into something incredible or...where an idea is chosen quickly and frivolously causing angst for both student and teacher for weeks to come as they both struggle though the rest of the writing process.

Care, thought, and time should be taken when selecting an idea for a piece of writing.  I believe asking students  to think "small", at first, is the way to help them focus their idea and then grow it, as they move through drafting, revision, and editing.

A fourth grade teacher from a school in which I consult invited me to demonstrate a drafting minilesson in her room a few weeks back.  To gain some insight, I asked her to send me a list of the students'' ideas.  This is the list she sent. 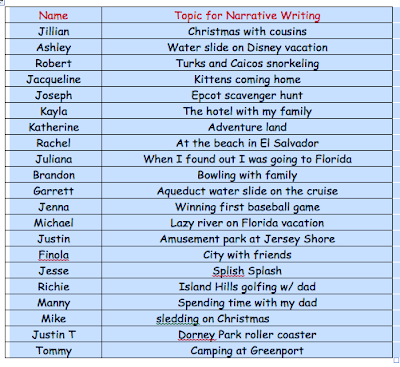 As I sent her an email discussing the importance of selection, I suggested we think smaller and that she ask some of the students (Kayla, Katherine, Rachel, Justin, Finola, Manny, and Tommy) to focus in on some of their larger topics.  I received her response in my inbox and was so pleasantly surprised to receive a new and revised list of the students' selected topics for their personal narrative after some conferring on her part.  They were smaller, more focused, more interesting (let's be honest...), and had a much better shot of being drafted, revised, and edited with less stress, better focus, and more excitement. 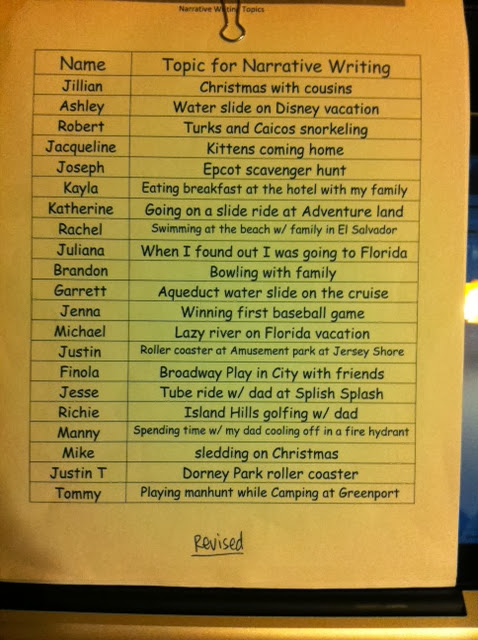 Check them out side by side.... 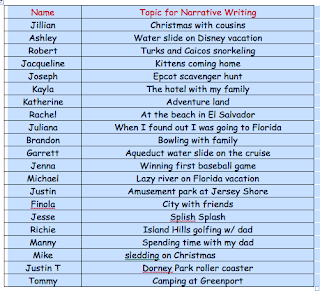 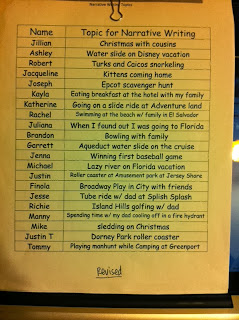 As Kayla, Katherine, Rachel, Justin, Finola, Manny, and Tommy took their larger topics, shrunk them down, and created smaller ones, without even realizing it, their writing experience became a deeper one.

Selection, and selecting a smaller idea (regardless of the genre) is the key to making students feel successful right from the beginning of the writing process.  I hope Ralph Fetcher can forgive me.
Posted by Sarah Cordova at 10:35 PM